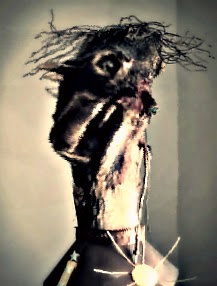 Torture Herald
STR 10, DEX 8, WIL 8, 14hp. Cold Trident (d8, see below), Pistol (d6), Adorned military uniform that looks like a child made it.
Walks in spasmodic jolts, chases anyone that catches his gaze, and screams in broken speech. Claims he is from "Torture" and describes a spiral of infinite pain beyond our own, awaiting all on death. If you ask his name, he just screams at you. Nobody likes talking to him.
Rumours are that he's just a disfigured, crazy mutant, but he insists that he hold an official position from the realm of Torture.
Wants to convince others that he's really from Torture, and that they're doomed to an eternity of pain after death. Also wants to travel to the other realities that he claims exist beyond our own, to spread the word further.
Cold Trident: Anyone dealt Critical Damage by the Trident is held in a painful limbo of tortured half-life as long as the trident remains touching them. If they wish to give mercy the wielder can wrench them back to life, leaving them at STR 1 with 0hp. If they remove the trident, the victim dies instantly.