As concrete canals feed Bastion, bloated rivers roll country folk from one place to another at an infuriating pace. Nobody cares enough to map them, so they just think of it as one river. It's not much use if you want to actually get anywhere, this is Deep Country after all. 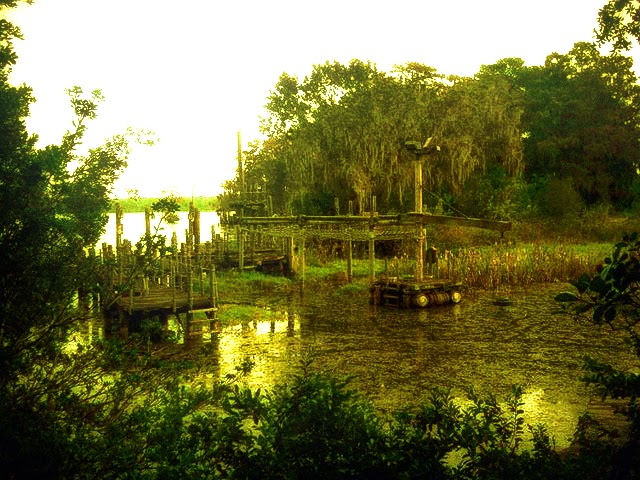 1 - Wracked Battlepaddle Marines
Sputtering remnant of a river-bound army, wiped out by Bastion forces. Will try to rouse countryfolk into rebellion against Bastion, or else bully them out of supplies. If they catch the oily scent of cityfolk, they'll take them hostage and try to ransom them back to Bastion in return for apologies for war crimes.
Beaten Marine Detachment - STR 8, 8hp, Muskets (d8), Bayonets (d6), Old Bomb (50% chance it still works), Patchwork Banner, Barrels of Brandy (50% chance they're drunken).
Battlepaddle Boat 5hp, Armour 2, Swivel Guns (d10)

2 - Silt Diggers
2d6 Mucky men, waist deep in the water, trying to bury d6 corpses in the silt of the river. This is part of a local ritual and anyone that is unaware of it will seem like an uneducated heathen to them. They want to get their job done and get home so they can smoke themselves stupid.

3 - Bathing Masses
A school of 50 children have been driven down here for their weekly bath. They're throwing mud at each other and the lone teacher is barely able to stop them turning feral. They're already over-excited, so if you do anything to stimulate them further the teacher will lose control and try to hurry you along.

4 - Veiled-Raft
A young couple have curtained off a little gondola for some private time. Rumour is that this prevents unwanted pregnancy. It's anchored in place at the middle of a wide span of river.

5 - Bug Smokers
2d4 wading men and women (5hp) with bundles of lit herbs, wafting their smoke in the direction of the countless insect swarms. They wear plain clothes without protection, and are choking on the smoke themselves. A lone woman (8hp, STR 12) with a musket watches over them. If approached she announces that these criminals are serving their punishment and encourages you to quickly move on. She just wants to finish this shift and get home.

6 - Lazy Pump-Raft Bandits
A fat woman (WIL 8, 8hp, d8 Pipegun, frilly dress) and short, bald man (DEX 15, 4hp, d6 pistol, d6 claw-hammer, old military uniform) are pumping their way down the river on a wooden raft. If they pass an easy target, they'll try to rob them for everything they've got. If they pass somebody threatening, they'll warn about river bandits further downstream.

7 - Laughing Newts
Annoying little creatures that cackle and spit water, following in a boat's wake until they're fed. If you try to ignore them a few brave newts will climb aboard and try to lick your face. With any sort of fight they'll flee back to the water before trying again later.

9 - Floating Shrine
A buoyant pagoda of sorts (5hp), drifting on a downstream pilgrimage. d12 naked old people (STR 7, 2hp) are sat on benches inside, painting themselves with mud from the river bank. They will try to spread word of the three divine truths of river life. 1: Clothes must not be worn on the river. 2: Anyone not accepting the first truth is a sinner, until cleansed with mud. 3: The faithful must cleanse the sinners.
The upshot of this is that they'll try to get you naked, or else throw mud at your boat. They'll be driven off with any sort of resistance, though, and have nothing of value on their shrine.

10 - Wet-heads
d4 floating wooden baby heads about the size of a football, with candles in their mouths. The custom is to throw a penny into the head when you pass, causing them to eventually sink, putting a young spirit to rest. Each will already contain d20 copper pennies.
Posted by Chris McDowall at 15:48