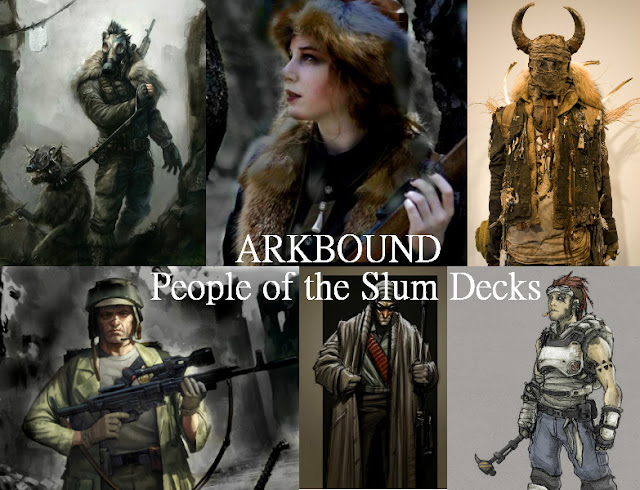 From top-left to bottom-right.

1: It's really hard to look for post-apoc art without gasmasks. This was my one concession, as him and his dog are clearly scavenging through the ruins of an abandoned slum after a particularly bad engine-leak.
2: Anything natural salvaged from a planet is a luxury and status symbol on the Ark. Here a slum ganger shows she's not to be messed with.
3: Market traders are particularly keen to show off with costumes decorated with bones, feathers and pelts. This stim-dealer is so confident in his reputation that he's willing to have his vision completely obscured.
4: Some mercenary companies have managed to stay independent of the Arks. He drifts from one to the other carrying out work, never staying long enough to become Arkbound himself.
5: It's been fifty years since the tempest and few are alive that remember a time before. He'll tell you stories from before the Tempest in return for a flask of booze.
6: Only a few skilled engineers are Officers, but even those who are Arkbound are generally looked after better than the rest. Here a young worker has been taken under the wing of an Officer.
Posted by Chris McDowall at 12:26