Visual Inspiration for Arkbound Guns (and a Chainsaw) 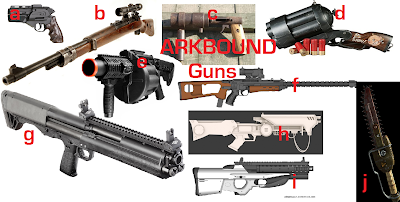 a: The Slug Pistol is the most common weapon you'll see. It's easy to manufacture, plentiful in salvage hauls and ammunition can easily be produced. Most people on the slum decks have one stashed away somewhere.


b: The Bolt Rifle is the other low-tech weapon that has found great popularity on the Arks. Like the Slug Pistol it's simple and easy to look after. For what it lacks in mobility it makes up for with long range and a heavy punch.

c: A lot of weapons are produced on the Arks, both in and out of the Factory Decks. Every slum will have a number of weaponsmiths producing cheap but effective weapons from what they can salvage.

d: The Thudgun is mostly a big shotgun. Although unwieldy its huge shells can shred a victim to pieces. Scatter is much less than a shotgun so their effective range can be deceptively far.

e: Plasma Launchers resemble grenade launchers but blast out their canisters of super-heated plasma with devastating effect. These advanced weapons are usually reserved for Officers but the gruesome deaths they inflict make them objects of lust for slum gangers.

f: Railguns had become the standard long-range rifle on many homeworlds. They can be complex to maintain but deliver fearsome firepower at long range.

g: Somewhere between an SMG and a Minigun lies the Stormgun. They are sometimes nicknamed Screamerguns because of the rattling shriek they emit when fired at full rate.

h: Wave guns are one of the few purely energy-based guns, bombarding the target with flashes of energy that sear away at flesh and cause intense ongoing pain. The energy can be focused into a short beam that will allow the energy to penetrate even the toughest personal armour. Flash Guns use the same technology but are much less powerful and were a failed attempt to create a military standard, losing out in popularity to the Pulse Gun.

i: Pulse Guns were a standard military issue on many homeworlds. It fires a specially constructed bullet chased by an energy pulse. When the pulse catches up with the bullet on impact it reacts violently for extra damage. The special ammunition required for this gun is plentiful on homeworlds and always a target for salvage.

j: Not a gun, but melee weapons are commonly used by slum gangs particularly. The Sawblade (pictured here) and Powered Hammer are both power tools that have been weaponised.
Posted by Chris McDowall at 16:28