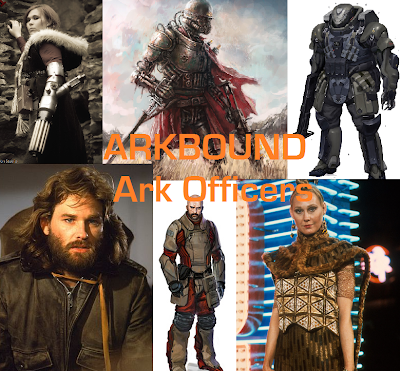 From top-left to bottom-right.

1: It's no secret that Officers are terrified of the Arkbound that live in the deepest, harshest slums. It's "grow up tough or die" and even the most well trained Officer can't compete with that. Two ways of regaining the edge are the BodyMods and advanced weapons we see here. Very fashionable fur-lining too, of course.

2: Robots are a particularly precious salvage. Some are thrown into the factories but many Officers take on a personal bodyguard from those salvaged. Those with more advanced intelligence are given an honorary Officer rank.

3: When your run-of-the-mill enforcers aren't having any impact the Officers may break out the best gear in their arsenal. Here we see Powered Full Armour being put to use.

4: Captains of smaller craft usually make one Ark their home base. If they are particularly skilled they will avoid a life in the slums and be given a low level Officer position. In return for long distance travel and a regular supply of fuel they donate a portion of their salvage to the Ark.

5: It's rare to see an Officer out of at least light armour, even on their own decks. If it's not the fear of a riot breaking through its a rival officer shooting you in the back.

6: The Captain's Table are his personal companions, advisers and guards. For their services they live a luxurious life compared to even the other Officers.
Posted by Chris McDowall at 16:03