The Terror-Stones show three groups of six beings falling from the stars and performing terrible deeds in the name of their group's single Virtue. Since then there have been scattered sightings and hearsay, and the stones have inspired the Angel's Imperative cult. Followers dress as poor imitations of their favoured Angel. 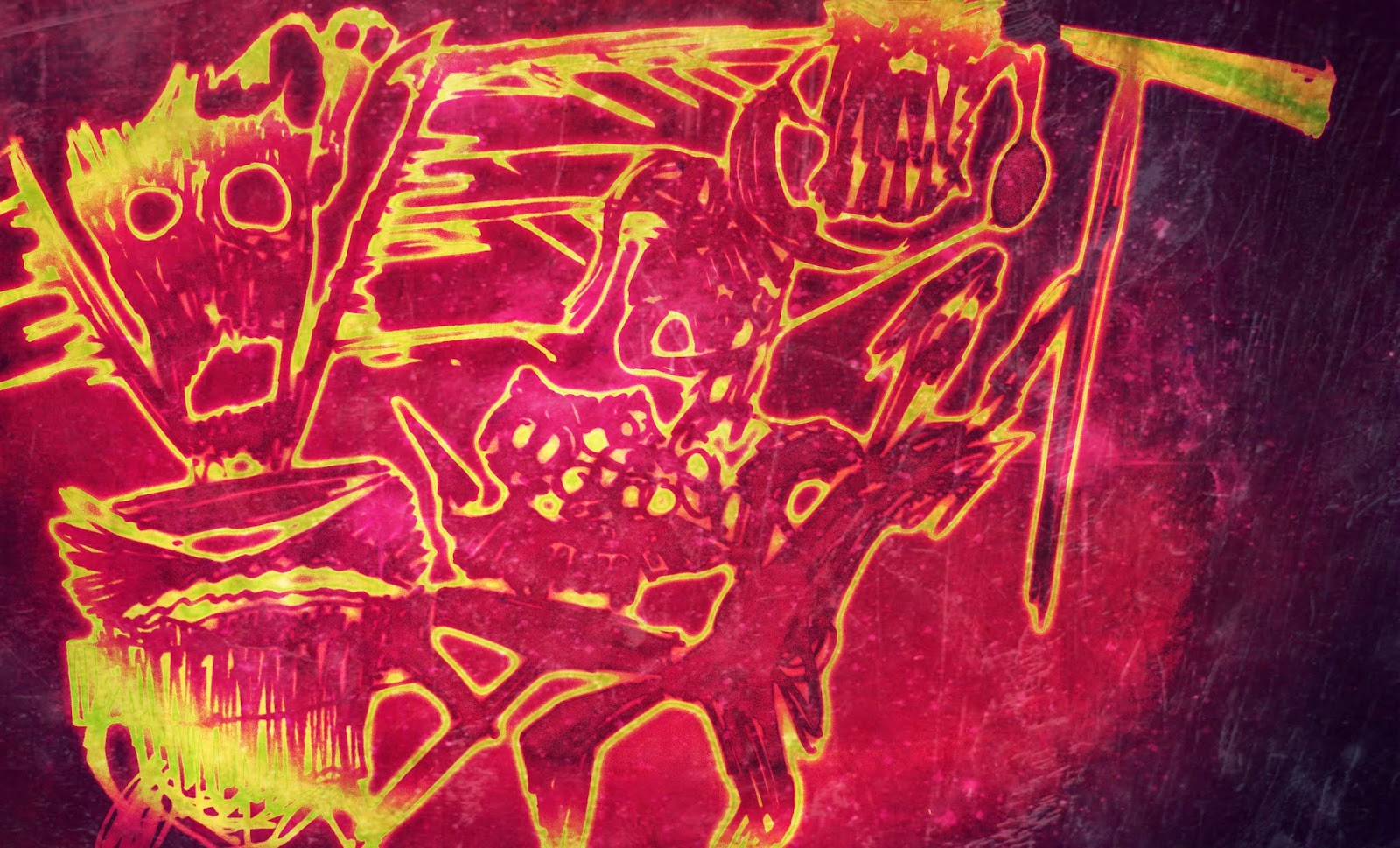 All Angel's have 25hp and Ability Scores of 18.

Glory-Angels - We Must Win.
Final Corpse - Huge Blunted Sword (d10), Glorious Red Armour (1), Skeletal form with tattered wings, Wants to duel and eat those she defeats.
Ashkan - Mercury Maul (d10, can turn to burning liquid metal at will), Charred Green Armour (1), horrible black lizard face. Wants to absorb more metal into his maul and gather heavily armed followers.
Metal Skull - Infinity-Slug-Gun (d10, blasts through any material), mechanically armoured body (1), exposed metal skull with long silver hair. Wants to dissect powerful beings to help perfect her form.
Father Vocal - Spike-pistol (d6), Crimson Star-Adorned Armour (1), Enlightenment Scepter (d8, causes false visions of paradise on a willing recipient, or on Critical Damage), followed by d6 Mindless Acolyte Hordes (3hp, Clubs d6, Rags). Wants to be worshiped and followed without question.
Deep Mimic - Arsenal-Shard (d8, can reshape to any weapon), Green multi-limbed suit (1) for their conjoined-form, synchronised voices of young girls, one of the mass can split free for an hour at a time, but is mostly defenseless (3hp, STR 6). Wants to spread influence and eventually kill other angels so that one of her form can split free to take their place.
Blue Giant - Golden Mace (d10), Colossal Form (Armour 2), Cruel Eye Charm (shows a willing target how they will die unless they change their ways), near perfect telepathy, floating throne. Wants to test and improve his powers and eventually put an end to the constant war of the other Angels.

War-Angels - We Must Fight.
Hammer Queen - Big Golden Hammer (d10), Huge Golden Armour and Shield (2), Colossal Golden Mane, can raise golden walls out of the ground at will, Wants to drive the other Angels off what she sees as her planet.
Paragon - Father-Hand (d10 Fist, d8 Lightning-Gun, suspends victim in Stasis on Critical Damage) Blue Stone Armour (1), Wants to unite the other Angels to a greater battle in the stars.
Grey Savage - Fanged Sword (d8), Grey Fur Armour (1), Bestial Fangs and Senses. Wants to journey into the harshest wilderness to find her ultimate battle.
Slaughter King - Brass Axe-Cannon (d10 melee, d8 sputtering bullet-fire) White and Red Spiked Armour (1), can barely string two words together between shouting. Wants to fight the ultimate battle forever.

Besieger - Wrecking Cannon (d12, fires a single ball that can be summoned back to her, striking everything in its path) Black and Silver Plate-Suit (2), Personal Iron Chariot (10hp, Armour 3) pulled by a pack of huge metal burrowing-insects (6hp, Armour 2, d6 jaws). Wants to bring down the tallest towers and thickest walls she can find.
Perfection - Scream-Beam (d10, Ignore Armour), glittering sword (d8), Gaudy white and pink armour (1), Short-range prescience. Wants to keep the angels fighting amongst themselves waiting for a moment of weakness to betray them.

Death-Angels - All Must Die.
Killer Bird - Metal talons in place of hands (d10), Black and white jet-pack armour (1), can pass from one shadow to another at will. Wants to strike the other Angels when they show weakness.
Black Tiger - Energy-Pistol (d8, melts things), Stone Sword (d8), Black Masked Armour (1), Book of names of people that know too much, limited telepathy. Wants to kill those who seek to learn to much, and protect herself.

Thunderchild - Jagged Sword (d8), White Armour, Red Cloak, and Glowing Muscle-Steed (Armour 2), Can move as fast as lightning when the sun's in the right position. Wants to kill those that run away from their duty, or from her.
Death-in-Waiting - Poison Gas Gun (All within cloud lose d6 STR per turn and turn all gross) Pale green chain-armour with copper plates (1), Can see death approaching new victims, and diseases in the air. Wants to find a way to destroy all life once and for all, taking on her new title as Lady Death.
Warlord - Golden Pincers (d10), Grey armour adorned with red eyes (1, sees in all directions), Always knows the location of the other Angels. Wants to destroy the Sun.
Terror Ghost - Lightning-Rod (d8, ignore armour), Absolute Black Armour (1, anyone looking for more than a turn loses d6 WIL), Can conjure bat-like swarms out of shadows to distract or terrify. Wants to kill the wicked first, then everyone else, then himself.
Posted by Chris McDowall at 17:50