Leading from the Front

Mass Combat in Into the Odd uses a dead simple detachment system. A detachment is the rough equivalent to 50 decent infantrymen, and acts as an individual in all ways other than the following:

- Individual attacks cannot harm detachments unless they're something big like a cannon, bomb, or giant creature.
- Detachment attacks are Enhanced against individuals, causing d12 damage regardless of weapon.
- When they would take Critical Damage, a Detachment is Broken and useless until rallied. 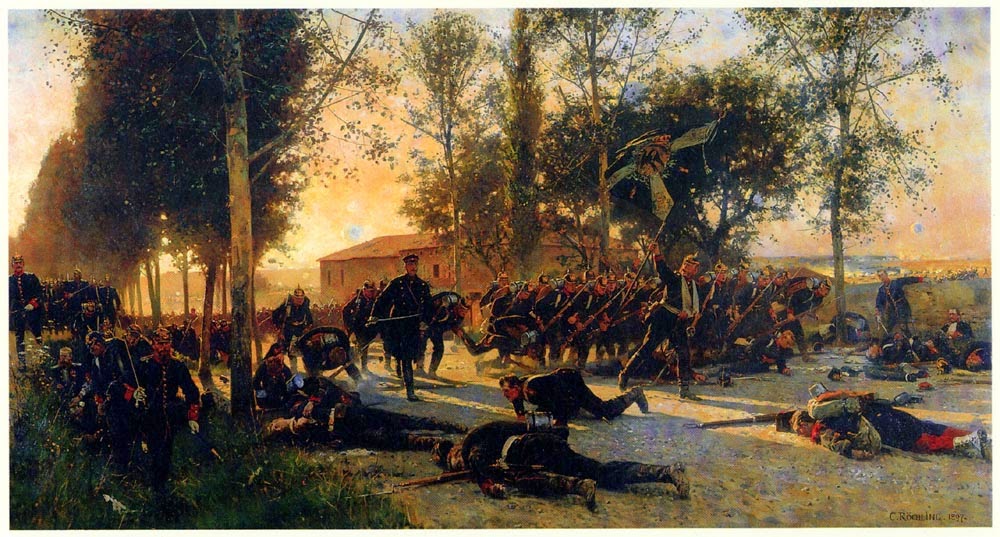 But there's no mention of what individuals do here. My intention was that individuals would typically be leading from the back, directing their detachments in battle and handling the overall strategy, maybe attempting some risky gambits.

If they were fighting, I saw them contributing with attacks from Arcana, Bombs, or other special things they've managed to get hold of. The explorers of Into the Odd aren't really the sort that will take on an army themselves through sheer martial skill.

The Odd World Toolkit is all about looking at Large Scale play in more depth, and will go into some detail on how to run a large battle like this. The goal of the toolkit is to expand a Referee's options, and improve their game, without adding any more rules, so this will all be working within the existing rules.

Getting involved at ground level is a risky thing. So it will use the Saving Throw rule as its basis.

Leading from the Front

When a character wants to personally lead their troops, the detachment benefits in a few ways. Most notably, they can use the WIL Score of the leader (if higher than theirs) in place of their own, and the leader may posses Arcana that will aid them in battle. The character is also protected from enemy attacks, other than individual challenges, while the detachment is protecting them.

At the cost of their protection, the leader of a detachment can lead through example, personally fronting an attack on an opponent. This could drive the troops with a surge of momentum, but carries an obvious risk to the leader's safety.

The detachment and leader both make an attack roll as normal, but only the highest roll is taken. The attack is treated as coming from the detachment, even if it was the leader's roll. If the attack is against an Individual, only the Detachment's roll is Enhanced.

Until their next turn, the leader is subject to all attacks that target the detachment, with both leader and detachment taking damage. Remember here that Detachment attacks against individuals are Enhanced.

Multiple characters can lead the same unit, if they wish, in which case they all count as Leaders and may individually choose whether or not to lead from the front each turn. Both enemy detachments attack Grunning's Pistoliers for 2 (Mob) and 3 (Dogs) damage, leaving them on 0hp. Majorly roughed up, but no significant casualties yet. They're in real danger next turn if this carries on.

Grunning decides to lead from the front to try and drive the Mob away. He rolls 7 damage, and his Pistoliers roll 3, so his roll is taken. He personally blasts away a few stinking workers, leading them with 0hp and reducing them to STR 7 with the remaining damage. They make a STR Save against Critical Damage and roll 17, a fail. They're dispersed in a cloud of musket smoke, no further threat in this battle.

As half of their force has been broken, the dogs would ordinarily require a WIL Save to avoid being routed, but these rabid beasts don't know when to quit.

The Dogs take their turn, but their attack will now target both the detachment and Grunning. They roll d6 damage against the detachment (scoring 2), and d12 to Grunning (scoring 5). He's reduced to 3hp, so no major damage. With no HP remaining, his detachment is reduced to STR 10 and roll a 10 on their Save, just holding their line.
Posted by Chris McDowall at 10:12