Bastion's hired guns are known for seeking the most unusual equipment of the electric epoch. Sometimes they enjoy their signature weapon a little too much.

Each of these is available for hire, £5 for a day's work where they'll do the following:

Each Mercenary comes with their own specialist equipment. If this is damaged or lost they always blame their employer, immediately ceasing their service and pursuing financial compensation in Mercenary Court. 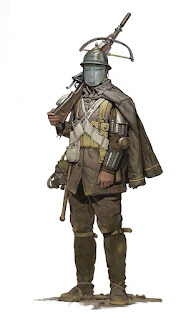 HASTER SMUZZ
DEX 15, 10hp, Trench Armour (1), Baton (d6).
Orbalaster: Bulky, Functions as either a Crossbow (d6) or Rifle (d8) or can fire one of three specific combination rounds. He generally carries one of each.
Salt Charge: Blasts out a fluorescent salt-like powder. Anybody within the blast that is currently Wounded is overcome with pain and instantly incapacitated.
Wild Charge: Blasts out a red mist, any animals in the blast become immediately violent towards the nearest other being.
Null Charge: Blasts out an impenetrable darkness lasting a few minutes. Nothing more complex than a bow can function in the darkness. 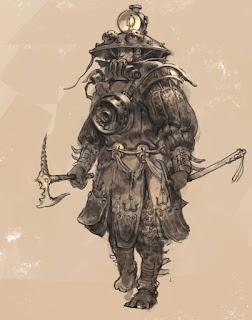 DOVVET DERAUMA
STR 15, 10hp, Quarry Armour (1), Two Hatchets (d6 each).
Absorption Engine: Bulky. Chest mounted device that activates when she causes Critical Damage to an opponent. The victim is sucked into the jet-like hole and sprayed out as a bloody mess.
As a secondary function the engine allows very slow, careful flight and can be fed inorganic matter to spit out a d6 Blast of shrapnel. 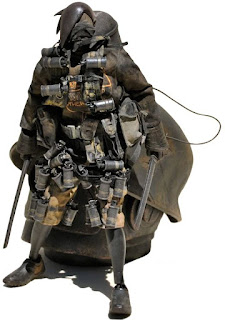 CANS GUTTANINE
10hp, CHA 5, Two Chop-Swords (d6 each).
Spirit Bombs: Each of these contains the canned essence of some alien spirit. Cans isn't sure which one is which, so roll d6 when he throws one. Once the spirit is released it cannot be returned and does nothing besides lash out.
1: Abyss Spirit: 10hp, De-Pressurisation Touch (d10 ignore Armour, explode on Critical Damage).
2: Iceberg Spirit: 12hp, Icy Form (Armour 2), Crush (d10 to all in a line).
3: Smog Spirit: 6hp, d6 Choke to all within, Immune to physical attacks but disperses if left alone.
4: Pickling Spirit: 8hp, Acidic Splash (d6 Blast), Anything killed is preserved and delicious.
5: Heat Spirit: 12hp, Glowing Metal Body (Armour 3), Heat Ray (d8), longs to be cooled down which causes it to become peaceful.
6: Razorwire Spirit: 10hp, Metal Form (Armour 2), Lash (d6 to all adjacent), Anybody taking Critical Damage is pulled in to be kept safe. 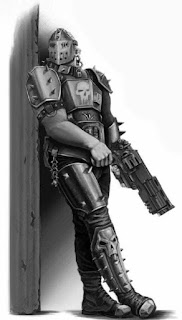 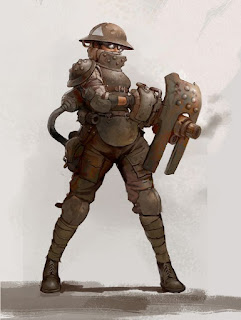 SPITCH TINDLE
10hp, Tin Armour (1), Boot Dagger (d6).
Turbo-Cannon: Bulky, also functions as a Shield (+1 Armour). Can be fired on three different modes.
Safe: d6 Blast. A spray of small rounds.
Turbo: 2d6 Blast. Twice the normal fire rate. If the rolls match the weapon jams and is unusable until the next Rest.
Ultra: Three 3d8 Blast. Thrice the fire rate with hot-rounds interspersed. If two dice match it jams, if all three match it explodes in a d12 blast. 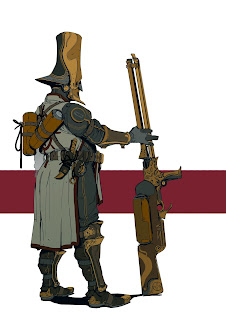 FINO BANEMANE
10hp, DEX 5, Brass Armour (1), Dagger (d6).
Trace-Rifle: d6, Bulky. Instead of normal fire, can shoot a Trace-Marker that marks the target unless they pass a DEX Save. The Trace Rifle causes d10 damage when it attacks Marked targets and annihilates them in a miniature black hole when it causes Critical Damage.
Posted by Chris McDowall at 10:01