Sail away from Bastion and Deep Country and things start to break down. You'll long for those homelands where the sun's touch was warm, and the rain was cool. Where the stars were still and sunrise came every day. Where things made sense.

The farthest-roaming sailors talk of Mausolossus as both a creature, an island, and a time. They say that every creature that dies adds to the mass of this entity, and when it grows large enough it will dive beneath the ocean to create a paradise for the dead.

From the distance it looks like a long island, a sawtooth mountain range cropping out of black foaming sea. 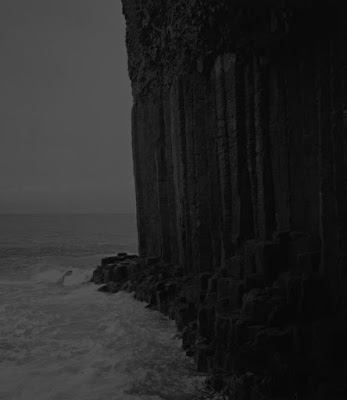 If you watch you'll see that it's dotted with iron walkways and domed structures, and it's moving very slowly like a half-submerged eel.

It has no head but there's a majestic prow, like some impossible galleon.

The tail of the thing is cracked, blistered and oozing a pale blue lava, burning hot even without touch.

If you approach the isle you're drawn onto the rocks, narrow stairs leading up the grey rock to the cliff-side settlements. 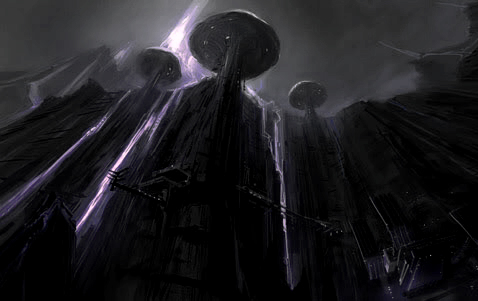 The residents claim they are the first dead. The ancient souls that were first aboard Mausolossus. The rest are trapped within the rock.

Mad men seek out Mausolossus for this reason, hoping to find a lost loved one and take them back home.

They're gaunt, desiccated humans, not rotting corpses. They only inhale, and talk in screeches. They feed on salt that they can draw out of the ocean at will. They're mostly defeated, knowing that all life will die and return to Mausoloussus at some point anyway. In spite of this, they do have different attitudes.

Roll d6
1: Kill the living to feed our host.
2: Stay with us forever to serve as amusement.
3: In utter despair and too hopelessly broken to have any drive at all.
4: So desensitised they don't even react to you.
5: Take me with you so that I might kill more living things.
6: Get me off this thing and back to wherever you came from.

Physically they vary as much as humans, but they all do something unusual when they touch a living creature. Roll once for each little community of souls.

Roll d6
1: Draw the water from their bodies, for d6 STR loss.
2: Trap them in a timeless state. Both unaware of passage of time unless someone breaks them up.
3: Show them visions of a dead world after all life has perished.
4: Let them see with the "eyes" of Mausolossus, where everything is dark except a glow from living things. The glow fades if they're close to death.
5: They can't handle the surge of life, and lose d8 STR themselves, exploding in light on death.
6: Suck out enough life force to transform into a glowing murder-wraith for an hour (immune to physical attacks, STR 18, DEX 18, d10 Black-Helix-Ray, hostile until someone has died, other stats the same).
Posted by Chris McDowall at 11:30