The Odd World - Why Visit the Golden Lands?

The Golden Lands represent an entirely different frontier to The Islands. The latter seem tame and manageable compared to this sprawling continent. Here's what the game document has to say.

The distant continent to the South starts as sweltering jungle and impassible swamp, leading to an endless stretch of desert. Dotted amongst the feral cultures are great cities filled with riches. These distant kingdoms watch the amassing guns of the Sister States and hide their own forces and Arcane secrets. 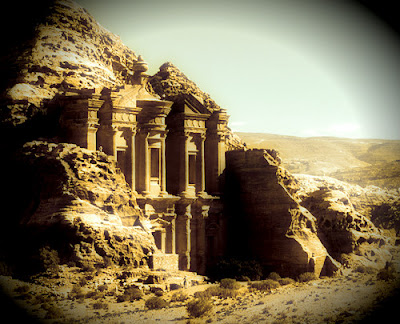 Things to Do in the Golden Lands
- Get some gold! They wouldn't call it the Golden Lands for no reason, would they?
- Stir up a war with the Sister States. The industrialised regions here are more than capable of mounting a sizeable, mobile army.
- Bring the wonders of technology or astral worship to the feral cultures. Just try not to get murdered.
- If you thought the Astrals left an impact on the Sister States wait until you see what's crashed in the jungle.
- Hunt primordial beasts, perhaps even bringing one back to the Sister States alive.
- There are ancient ruins down here too, you know. Civilization has been here just as long as back at home and there are plenty of fallen societies.
- Find out what lies beyond of the endless desert. Even the locals don't seem to be sure.
Posted by Chris McDowall at 14:33