The Odd World - Why Visit Bastion?

If Rosevine represents the sprawling history of the world then Bastion is an icon of everything occurring in the present. Here's what the game document has to say about the Hub of Mankind.

With nearly a million citizens, Bastion has become the largest city in the known world. Its skies are black with smoke and its streets bustling with residents from every corner of the world. Canals feed the city with trade from every direction and vast factories produce mass goods and new prototypes. The city sits on a network of tunnels and vaults that hold devices and beings of great power. Their contents are only known and accessed by the ministers that lead the nation's parliament. New ideas and enterprises flourish along with frequent and bloody revolutions. 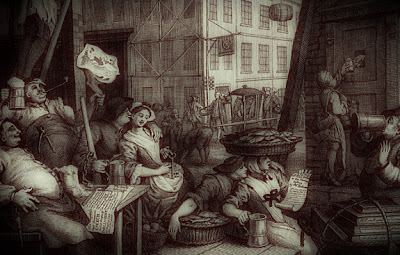 Things to do in Bastion
- Sneak into the vaults underneath the city, hoping to snatch a powerful Arcanum.
- Work with local academics to recover a new Arcanum to be stashed away in the vaults.
- Investigate a reclusive engineer thought to be trying to transfer his life force into a machine.
- Lead downtrodden factory workers in a rebellion.
- Find out who or what is behind the hideously mangled corpses being found floating in the city's canals.
- Earn some money in a fighting pit.
- Join the latest political idealist in gathering an army of supporters.
- Deal with an escaped entity from the vaults, now roaming the tunnels beneath the city.
Posted by Chris McDowall at 09:43