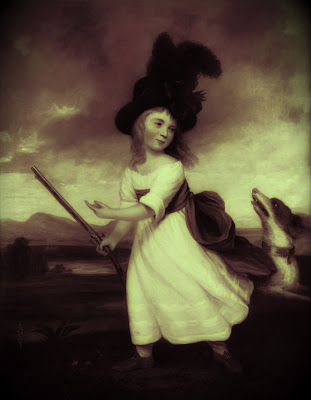 Caspia lived a life of aristocracy for her first nine years, enjoying hunting with her favourite hound, Scraps. One morning, while hunting with her father, she saw her family mansion glow white. With a flash of light it was reduced to flaming rubble and Caspia and her Father collapsed. When she woke her Father was gone.

Since then she has become inseparable from Scraps. She appears to have intense conversations with the hound. Homeless, they wander Bastion Country, surviving day to day. Several family members within the aristocracy have taken them in, but they always escape before long.

Scraps - Gunhound
STR 10, DEX 13, WIL 5, 7hp.
Acts as an Arcanum for Caspia with the following spells.
Command Word (Power 1): Order a target to drop, fall, flee or halt unless they pass a WIL Save. Can only target animals.
Breath of Recovery (Power 2): Touch a creature and restore 1d6 points of lost STR, but take that much damage yourself. Scraps takes the damage when Caspia uses this Spell.
Dire Beasts (Power 5): Up to five animals double in size. They gain +1 Armour and melee damage. They also grow much more violent. Scraps must be one of the targets.

A character for Into the Odd.
Posted by Chris McDowall at 09:57

Labels: into the odd, npcs