Why Into the Odd is a Horror Game

Into the Odd is now officially "A Survival Horror Roleplaying Game". What qualifies it to carry that subtitle? There are those that would argue even regular D&D is a horror game, making some excellent points, but what about my variant? 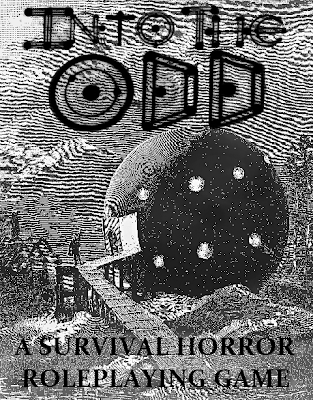 Deceptive Normality
The setting of Into the Odd is filled with normality. Sure, there are revolutions, plagues and cruel factory-masters, but this is all very mundane stuff. The Odd is out there to be found, but most of civilization is similar to our own world, even the cities that are built on crashed spaceships. Wars are fought by men with guns, not armoured knights or battle wizards. Factories mass produce goods and companies and politicians share power, with monarchs being no more than figureheads. This is an early-modern world we can relate to, not a medieval fantasy.


The Known but Incomprehensible
Beside the relatively mundane happenings of an industrial world are things nobody understands. Grouping Arcana under one name is deceptive, as the game clearly dictates that they should break the rules. You can use an Arcanum and talk to scholars about them but nobody really understands them or knows a way to bypass the risks of using them. Similarly, everybody has a theory on the Astrals, but there are no solid answers. They could be aliens, divine beings, demons, advanced terrestrial beings or pure mythology.

Unfair Enemies
Referees are told to create monsters that break the rules and function in a vastly different way to normal characters. Most importantly, don't think of monsters as opponents to act as a fair fight to the characters. An encounter with a monster doesn't have to mean combat and in many cases it should be actively avoided. I hope to lead by example on this one with the seven example monsters provided in the game.

The Dust Hag, Beckoning Shadow and Thing of Glowing Smoke are immune to normal weapons. The Abbysal Turtle is so huge that small arms are going to have very little effect, requiring Arcana or at least siege weapons. The Dead Echo can only be fought in darkness or a reflection and the Strange Hunter has a disintegration gun that exceeds any earthly weapon. The remaining underdog monster, the Ebon Crawler, can be fought simply enough but if it pins you down it'll dislocate its limbs, slither down your throat and hibernate in your corpse. Needless to say I want to encourage a sense of fear when it comes to monsters the characters will encounter.

Creeping, Inevitable Death
Not quite inevitable, there's no fun in that, but the threat is inevitable. If you fight for long enough you will have to start making saves to avoid Critical Damage, and that's always bad news. Attacks cause damage automatically, unless your armour reduces it to zero, so your Hitpoints are always a limited resource. They recover with a moment's rest, of course, but there isn't a standard method to recover them in combat. Watch them drip away as your character gets tired and starts to lose confidence. Do you want to stay around until you're at 0hp and need to roll a dread Save?

Disposable Cast
An alarming title, perhaps not as bad as it might sound. This effect comes from a combination of the Company system, where characters of Expert level either become members of a Company or found their own. This is the game's nod to the Domains of old and gives them a bank of resources, including characters. As the character proficiency curve is much flattened from traditional D&D it's a very viable option to send another member of your Company on an expedition in your place. If your main character does die, there are a bank of new characters waiting in the wings to take over their legacy.
Posted by Chris McDowall at 13:23

Labels: DnD, Horror, into the odd