Who ordered mecha rules for Into the Odd? 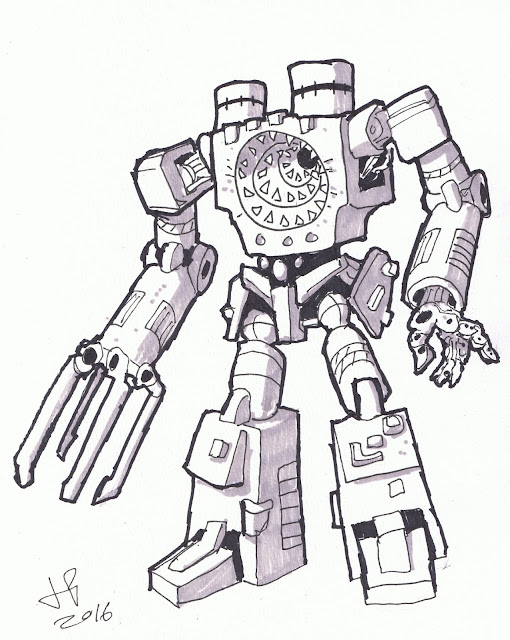 Things function just as in Electric Bastionland except:

Power is used in place of hp to resist attacks but also to power weapons and other systems. It recharges at the start of the pilot's turn.
Systems and Weapons cost 1 power to use as standard, and usually have one or more Overpowers (OP) that can be gained by spending an extra point of power.
Each Weapon and Overpower can only be used once per turn.
Unless noted, a system's effects last until the start of your next turn.
Frames have a number of slots available for Main and Aux systems. Aux systems can go into a main slot, but not vice versa. Each frame also has a special feature that doesn't require any Power to use.
Moving requires 1 power.
Collisions causes d6 damage to each side, +d12 against the smaller side if the weight difference is significant. Trampling a soft target incurs no damage in return.
Critical Damage means the Fighting Machine is disabled. STR 0 is utterly destroyed and the pilot takes d12 damage.
Pilots are protected from harm (unless noted otherwise).

Direct Hit
If you are taken to exactly 0hp, lookup the amount of damage caused on the table below.
1: Pilot Hit: The pilot takes d6 damage.
2: Overheat: You only regain 1 power next turn.
3: Exposed: On all future turns your pilot takes equal damage to your colossus.
4: System Shock: An Aux system of your choice is destroyed.
5: Power Surge: If you end your next turn with any power remaining, take d12 damage.
6+: Toppled: You are knocked down. Getting back up requires all of your power. 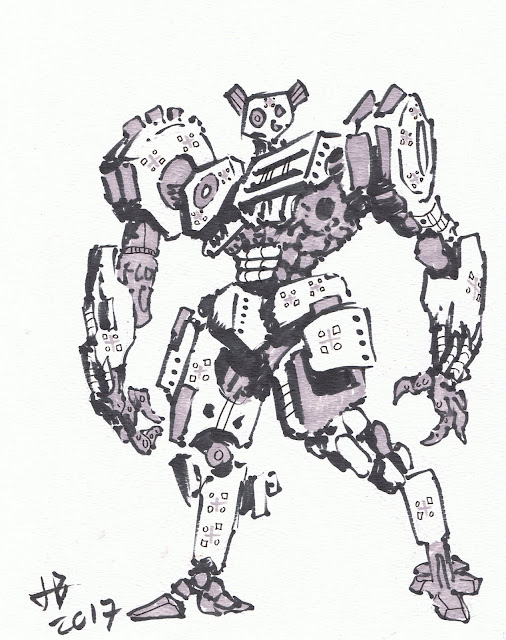 White Rock Medium Frame
Armour 2, STR 15, DEX 8.
5 Power, 1 Main, 2 Aux.
When you recharge from zero to full power you can activate any one non-weapon Aux system for free. 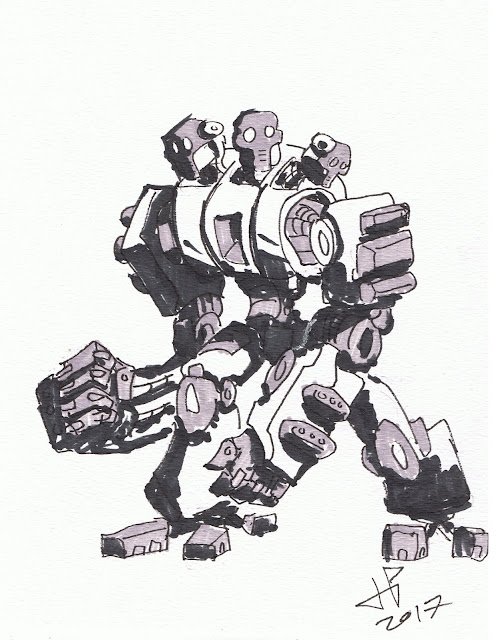 Fractal Bombard (Main)
d6 vs Machines only, ignore all defences. Damage repeats each turn until target pays 1P on its turn.
OP: Increase power cost to remove ongoing damage by 1.

Power Bank (Aux)
One use per battle. Immediately recharge Power.

Shield Bank (Aux)
One use per battle. Ignore up to 6 points of STR damage.

Lazarus Protocol (Aux)
Automatically pass any saves vs Critical Damage until your next turn.

Smart Gun (Aux)
d6, if you have multiple Smart Guns fire them all for 1P.

Defender Pods (Aux)
Anybody moving to engage you in melee takes d6 damage.

Squire Drone (Aux)
Have your drone (3hp, Armour 1) move and perform one of the following actions.
OP: Choose two actions. 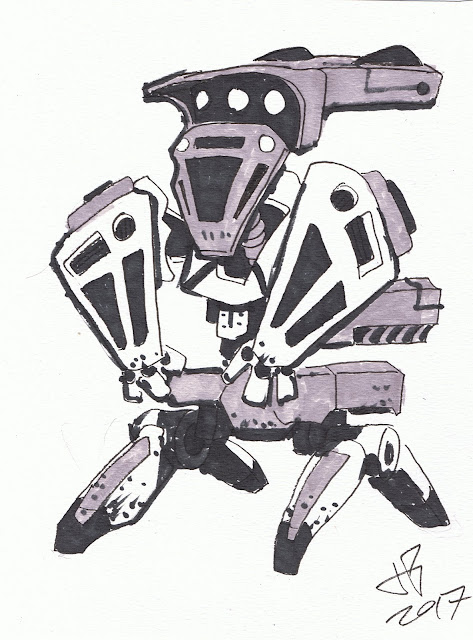 Gordo, a heavy mech with with two Railguns is ambushed by two Crows, light mechs each with a Hammer Cannon and Shimmer Field.

The Crows each have 4 Power. Each spends 1 on moving into position, 1 on activating their Shimmer Field and one firing their Hammer Cannon at Gordo. They both roll d10 for damage, and the highest die shows 8. The Gordo's Armour (3) reduces this to 5, and it uses 5 of its 6 Power to absorb the remaining damage. Both Crows now have 1 Power remaining.

Gordo recharges to full power at the start of his turn. He'll plays it cautiously and fires both Railguns at one of the Crows, electing to Overpower one of them for an additional +d10. This uses a total of 3 Power, leaving him with 3 remaining.

He rolls 3d10 and takes the single highest die, a 9. This is reduced to 5 by the Crow's armour (3 with the Shimmer Field), 1 point is absorbed by the Crow's remaining Power, leaving 4 points of damage to hit the Crow's STR score. With STR now at 6 it makes a STR Save vs Critical damage and fails, leaving the mech a smoking wreck.

Now the remaining Crow recharges its power to full and must decide whether to fight or flee. Perhaps they weren't so well equipped to deal with such a heavy opponent.
Posted by Chris McDowall at 15:39