By the book, if you want to try something unusual in combat, beyond a regular attack, you work with this:

Combat Manoeuvres: If the players want to do something like disarm or trip someone in combat, the side most at risk makes a Save to avoid consequences.

This is a really a more focused take on the standard procedure for running the game.

When the players declare action, consider your response in the following order:

Except it leaps straight to point three, which is largely appropriate for the deadliness of combat.

Strawman: But isn't the target most likely to be at risk? This makes a STR 18 character just as likely to pull off a great manoeuvre as the STR 6 guy.

Welcome to Into the Odd! Your Abilities aren't there to limit what you can do, but a high score puts you in a better position to take the risks that have high rewards. Sure, the STR 6 guy still stands a good chance of overpowering a weak opponent, but if they miss wouldn't you have rather sent in the STR 18, 12hp bruiser to suck up the consequences?

So how would this be managed for three of the most common forms of combat manoeuvre?

I try to disarm the opponent.
The target is clearly most at risk here, so they must pass a STR Save to avoid being disarmed. This obviously foregoes a normal attack, so there's no damage caused. I don't think disarming has to be an encounter-finisher so I'd let the fight go on if the target wants to pull out a sidearm or try to get their weapon back.

I try to grapple them.
Grappling is an unarmed attack, rather than a manoeuvre that would call for a Save. I'd rule that if you grapple up to someone you make an unarmed attack and grab them in the process. If they want to do something that requires them to get un-grappled, it's a STR Save to break free.

If the grapple extends to throwing them into a bottomless pit, I'd say that they get a STR Save to avoid it, and if they pass they'll probably try the same thing on you next turn.

I try to shoot them right in the head!
This is a standard attack. If you're shooting at somebody then the rules assume you're shooting to kill to the best of your ability.

If you want to be a true Fighting Force in this new epoch, you're going to want to strap into the appropriate machinery. 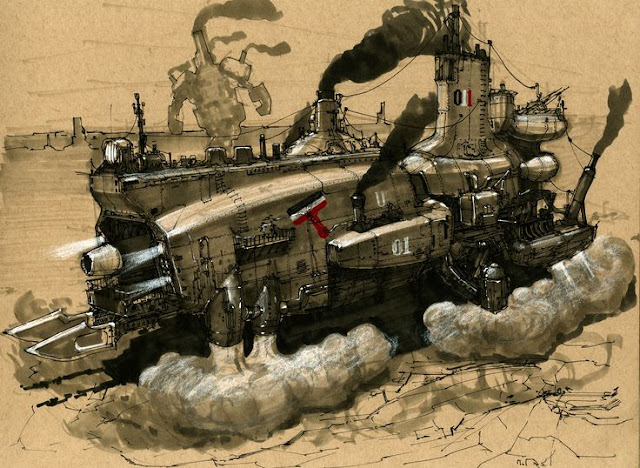 Ramming and Overrunning: Collisions between vehicles cause damage to both, based on the opposing vehicle’s weight or speed, whichever is greater:
Light/Slow (d4), Medium (d6), Heavy/Fast (d8), Superheavy (d10).
If one vehicle is heavier than the other, damage against it is Impaired. Vehicles take no damage for running over soft targets like people.

Cavalry: Charging cavalry count as a Medium vehicle for the purposes of Overrunning Infantry. Larger mounts are treated as Heavy. 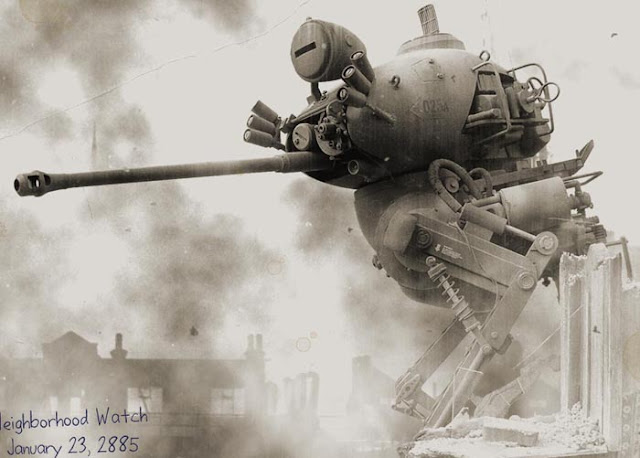 We can extrapolate a good silly example from this.

Normally the motorcycles would cause d8 damage on a collision from being Fast, but as the Devil-Whale is a heavier, the damage is impaired down to d4. Each of the four bikes rolls d4 and the highest is kept, scoring 4 damage. The Devil Whale's Armour 3 reduces this to a pathetic 1 damage.

Three of the bikes are wrecked, leaving their riders to take d6 damage each, while one manages to pull away in one piece.

Not the best anti-tank strategy.
Posted by Chris McDowall at 18:01