Part of the reason I started using Oddities instead of Arcana was to blur the lines between equipment, environment, monsters, and NPCs.

What monster doesn't have the potential to end up as a resource on your character sheet? What bit of the environment can't be made mobile somehow?

It might sound like a stretch, but the idea is to put strange phenomena everywhere, rather than feel it has to be bound to a little item you can carry around.

Of course your starting Oddity needs to be a thing you can carry, but for the rest of the game just make odd stuff and let the players decide what they do with it.

Roll d6 to see what Oddity do you find in this bit of Bastion.

1: Bitter Water - Gigantic snake of pure water.
STR 18, DEX 18, WIL 12, 13hp, d8 Pressure Jet (can be toned down for gentle cleaning).
- Furiously blast away any dirt, which it is most likely surrounded by.
- Communicate in single words you can just make out amongst the splashing.
- Ignore any damage unless it would freeze/boil water.

2: Explosive Temper
The next person you encounter has this condition. If they get even slightly riled, their emotions boil up to extreme levels, eventually forcing them to make a WIL Save or else combust violently, burning to death. Anyone burnt by the fire of this conflagration is subject to the same condition, even if the fire has been kept for a long time or spread to other fuel (hint!). The only way to rid the body of it is to bathe in the icy waters of the polar ocean. 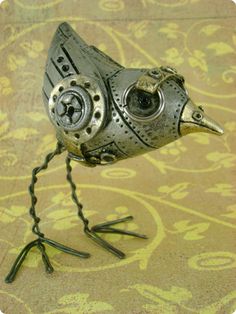 - Spend a short rest patching up a recent wound (if it caused STR loss, restore half of that lost)
- Attempt to perform on anyone it sees, friendly or otherwise.
- For scenes of mass injury it will scream out like a siren, and a flock of surgeons will arrive.

4: Mock Forest
Twisting masses of collapsed pipes, discarded machinery, and dead vermin has somehow willed itself into non-organic trees, vines, and even Mock Fauna. Equal chance of neighbouring boroughs seeing it as a place of wonder, unholiness, or utter disinterest.

5: Spirit Buffer
Anyone dying in contact with this sealed glass tube has their essence trapped inside. As long as the tube remains in contact with them, they continue to live an unnatural life. If contact, or the tube, is broken, they die a sudden but painful death. 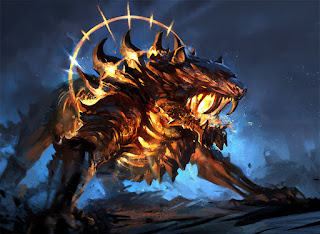 - Ignore physical damage, violently reject any fuel, and burn on pure will.
- Ask only two questions. "Who has wronged you?" and "Why are you worthy of Revenge?"
- Finally be quenched when it carries out a vengeance killing for a worthy being.
Posted by Chris McDowall at 11:34