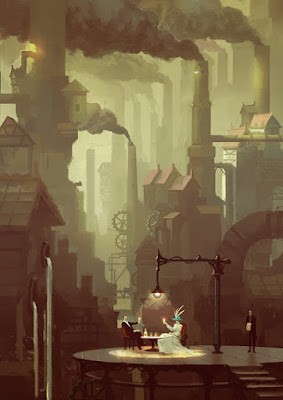 Pudding Deck
- Try the tiny but obcenely priced (1g for an assiette) desserts.
- Enjoy the only spot of clean air in the borough, with great views of others choking below.
- Hear the haunting voice of the wailing-waiter, an avant-garde performer in his second job.

Stack-Wack
- Buy an air-bag from one of the sickly urchins roaming the board-walks. Prices range from a penny to ten shillings depending on how desperate for air you look.
- Call into one of the tiny breather-bars that pump in clean(er) ambience and sell disgusting spirits to disappointed travellers.
- Hope the Green Smoke doesn't descend today (1-in-6 chance each morning/afternoon, d6 corrosive damage each turn just for being in it).

Drip-in-Pool
- Go under the greenish water and enjoy clean air from a rubber tube sticking out of the wall. Dozens of patrons sit around sucking on these, conversing in whatever gestures they can manage.
- Eat specially bred jellyfish live from the water as they swim by (the poolkeeper will swim by and charge 50p a jelly)
- At the top of each hour two prisoners are dropped from above in weighted shoes, each with a trident. If one manages to kill the other, the poolkeeper will (usually) release them from their boots.

Piling District- Where Things Go to get Broken 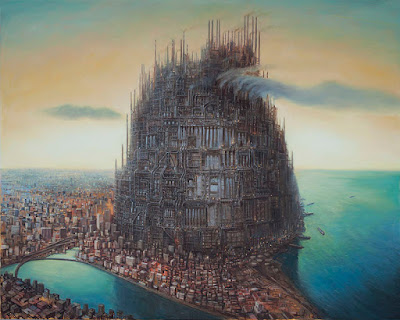 The Smashery
- Pay 20s to get anything you like smashed by the finest industrial machinery.
- Pay an extra 10s to push the button yourself.
- Pay an extra 1g to get to try one of the new prototype methods. They're very secretive unless you pay, but they involve an annihilation beam.

Discharge Docks
- Here the debris from the smashery is loaded onto huge barges and taken around the rest of the city. Great place to catch a cheap lift.
- For 10s you can have an hour sifting amongst the debris to try and find something useful (you probably won't).
- Throwing a penny down the Bottomless Well is considered lucky, but don't fall in because it really is bottomless as far as anyone can tell.


Breaker Quays
- Witness some of the most ground-breaking street art in Bastion, made by the Smashers on their days off
- Hear street poetry on the nature of smashing things by day and creating by night
- See the jagged sculpture of the Silver Man, a giant astral being rumoured to have visited the district and helped to build the smashery.

Neptile Quarter - Adults must be accompanied by a child. 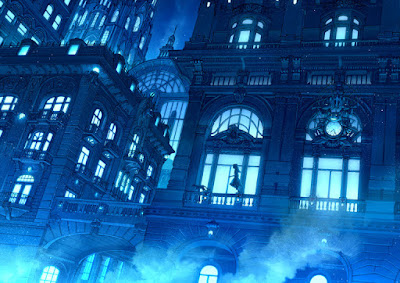 The Walkaways
- Avoid the pale children that legally own the district.
- Find the occasional creepy-heirloom discarded on the tiles.
- Peek into luxurious chambers kept pristine and locked away from childrens' hands.

Foggy Lane
- Visit the kindershops, selling the crap that kids are able to make without adult supervision.
- Take in a drousy cocktail of naptime-oil in one of the many sleepeasies
- Fall foul of some playground-level rule that you didn't realise, or that some kid is making up, and get banished from the district after paying a hefty fine.

The Crystalory
- Take an ornate canal ride through a maze of glowing, chiming crystals repeating the same stupid song over and over.
- Enjoy the narration of how the children came to inherit the quarter from Granny Neptile.
- Buy overpriced, useless crystals in the gift shop.
Posted by Chris McDowall at 21:07