I'm planning a one-player Investigation Game using Into the Odd, because why use anything else?

So Into the Odd is fantastically suited to modification.

Now investigating is a common activity already. Usually there are lots of mysterious things around, and some players will go out of their way to seek the truth. But the fact is that it's still a game about exploring. You're going into weird places, looking around, taking what's useful to you, and getting the hell out.

This game is going to be all about uncovering the truth. 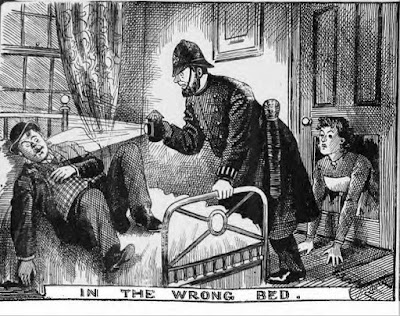 Starting Packages
The main character looks up their starting package as normal but makes the following adjustments:
- In place of the normal exploration gear, you get a lantern.
- Remove any Arcana, Weapons larger than a pistol or dagger (including bombs), and supernatural abilities.
- For each item removed, the character adds an extra Partner to their team:

Partners
You're the head of a small team, starting as you and one Partner, but more may be added as detailed above.

Partners are rolled in the same way as your main character, but don't get a starting package. Instead their equipment is based on common sense based on their Speciality.

Their name, capability, and manner can be rolled on the Bastion's Cast of Thousands table in the Oddpendium at the back of the game book.

Resources are tight so at any time you can only take one of your team out with you. Any others are sent off to other duties unless you delegate something to them.

Specialities
I said Into the Odd would never have a Skill System, and I stand by that. These aren't things that are going to give you bonuses. Instead they're exceptional bits of knowledge that you wouldn't ordinarily expect a character to possess, and their function is to give even more information, rather than modify what actions you can and cannot take.

When your Speciality applies to the current situation, the Referee goes over and above with the information you get. You can ask detailed follow up questions and get incredible insight related to your speciality.

The speciality also opens up a number of contacts you're likely to have within peers of that speciality.

The main character rolls 1d10 on each column for their two Specialities. Partners get one speciality each, rolling on the first column. If the roll is a duplicate, move to the second column or re-roll as appropriate.

Is Combat Deadly Enough?
If you want to make combat a truly last-ditch thing, then your issue is going to be with how HP is handled, as that's the buffer between safe combat and deadly combat.

You could remove HP entirely. All damage comes straight off STR and you could die to the first bullet fired at you at any time.

I'm going to go a third way and say that we don't actually need any mechanical changes here. The goal is to make combat undesirable, not to add more immediate death.

We can do that by making HP more precious, something you really don't want to lose.

And we do this through...

The Monster of Time
In investigations, time is the worst enemy of all. With unlimited time any mystery can be solved, so we want to apply a sense of urgency.

Those timelines of future events never really clicked for me. I appreciate something looser.

So replace the Resting sections of the game with Downtime.

Downtime is a sit down, a drink, some time to compose yourself, recovering all HP. This can be considered roughly an hour, but all that matters is that it's long enough that opposing forces stand a 50% chance to move ahead with their agenda, using their Actions as a guide.

Major Downtime is a dedicated period of rest, recovery, and medical or emotional care over a number of days, recovering all Ability Scores. In your absence all opposing forces will significantly advance their agenda, using their Actions as a guide.

Other Things to Remember
- Acting on information is more fun than searching for information. Give them the info and let them play with it.
- The Partners are not pawns. Have them act on their own desires and fears.
- Bastion has Everything.

Next Time: Actually planning the investigation game.
Posted by Chris McDowall at 18:11