A Borough, a District, and a Quarter

Nobody agrees on how best to divide up Bastion.

Mayors, Lords, Grand Officials, and Master Judges bicker over blocks when the going is good, and claim no responsibility for them during hard times.

Whether a piece of the city is a borough, district, quarter, or town is completely unrelated to its size or significance, and the reasons are buried in paperwork from back when it was named.

Each region has a number of Points of Interest, which present variable opportunities.


High Borough of Mouse-and-Key - Testing-Slum for the newest engineering prototypes.

The Hyperwire
- Take an incredibly slow, crowded car up to the highest point for miles and get a good view of the surrounding boroughs.
- Try not to fall to a messy death down in the lower slums.
- Try not to hit a snag and hang helplessly for hours until a trained mock-monkey swings along to fix the mechanism.

Siren Mast
- Broadcast and receive messages from the handful of other prototype radio masts in the city. Mostly engineering nerd chatter.
- Join the techno-pilgrims that come here to view the wonder of engineering.
- Avoid the Rad-Warriors, overly groomed thugs that think the tower's emissions are bound to attract hostile extradimensional beings.

Community-One
- Hear lectures from some of the great engineering thinkers, with some of the worst ideas in history.
- Visit the Office of Collateral Damage to process paperwork you might have incurred through less civilian-aware activities, attending a self-improvement seminar to avoid future problems.
- Join the waiting list for an audience with Dieter Volt, the bespectacled genius behind the borough's new purpose.

Temple District of Veztm - Ten tourists to every local. 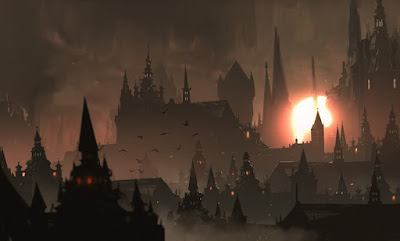 Schism Point
- Just try to see any of the temple architecture through the sea of obnoxious tourists and pilgrims.
- Avoid upsetting the actual residents of the region, each from one of a hundred sects, each with a thousand senseless protocols.
- Buy terrible merchandise.

The Splendid Honeymoon
- Meet travellers from across Bastion at the nightly Buffet. Each night is a different bizarre cuisine.
- Visit the cellar-garden to buy an overpriced bottle of wine or marvel at the domesticated subterranean creatures.
- Take advantage of the overpriced rock-spa that will offer any treatment with discrete service.

Princee Castle
- Enjoy the lavishly welcome foyer and entrance hall.
- Break through any of the locked doors to feel the wrath of the paranoid, trap-obsessed Princee long after his death.
- Find the dead Princee to rob his jewels.

The Last Smithy
- Meet Rab, an actor pretending to be hundreds of years old, acting as a medieval smith.
- Get charged obscene prices for "ancient methods" that really have nothing on modern metalwork.
- Hear Rab complain about how technology is the wrong direction for Bastion.

The Sour Oyster
- Reel at the stench of long-rotten shellfish and old beer.
- Carefully approach an unexploded siege-bomb lying in the middle of the tavern (d12 damage to all in the block).
- Discover the socialist commune of Mock-Rats living underneath the floorboards quite happily.