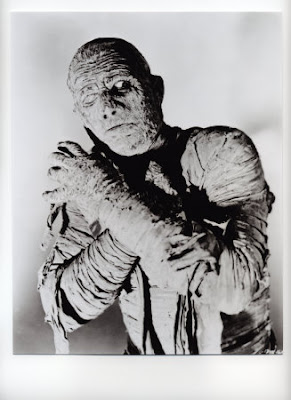 When did Mummies become the hard-hitting tanks of the undead? They're presented as slow but super-strong in both D&D and Warhammer.

Seems to me they should be the frail but magically powerful leaders of vast ancient armies. A very specific flavour of lich, really, perhaps awakening after a set number of millennia. Possible future spoilers for anyone playing in my Into the Odd game.

Dressed in full ceremonial armour and wielding an ornate spear, the mummified remains of the once great emperor cannot move without help. Indeed, he is never seen off his jade throne, which is carried by twelve brass skeletons, who serve only as an elaborate means of transport.
He speaks in a raspy groan, needing to be translated by one of the few living speakers of his empire's dead tongue. His thoughts are entirely set on regaining his stolen treasures and establishing a new empire.
The emperor can use any Arcana, even those wielded by his enemies, within 30ft as if he were wielding them himself. He is bedecked with jewellery and a foot-high crown. Together these jewels function as an Arcana containing the spells listed below. Only one of the Emperor's bloodline can wield these items. Anyone else that tried is blasted with lightning for 2d6 damage.
Eternal Hunger (Power 5): One target within 20ft must pass a WIL Save or lose 2d6 STR and you gain that many HP, even if it takes you above your maximum. These extra HP are lost when you have a full rest.
Death Knell (Power 7): All living creatures within 40ft must pass a STR Save or take 3d6 damage. Even those that pass this spell are deafened until they next have a full rest.
Eyes of the Stars (Power 8): You know the exact location of one object or being you have touched before.
Posted by Chris McDowall at 21:06

Labels: DnD, into the odd, monsters, undead, Use This