The Covenant of the Terror Lizards 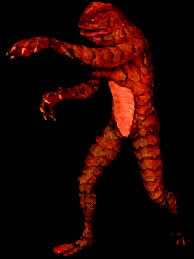 STR 10, DEX 13, WIL 13, 12hp.
Roams with his warrior cultists, using his Horned One spell on his followers in times of danger. If an opponent is weakened he will try to use Banish to appease the terror lizards from beyond.

Ceremonial Dagger causes 1d6 damage and is an Arcanum containing Banish and Horned One.
Banish (Power 8): The target must pass a DEX Save to avoid your touch, or they are banished to an extra-dimensional jungle filled with terror lizards. This leaves a glowing portal that anyone can follow through for the next few minutes.

Horned One (Power 4): One willing ally writhes and twists, taking the form of a Great Horned Lizard. They fight loyally until at 0hp, twisting back to their original form, now dead. 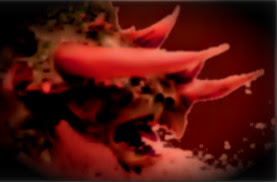 
10 Harmless Cultists
STR 8, DEX 9, WIL 9, 2hp.
Will not fight, but are willing targets for the scaled man's Horned One spell. 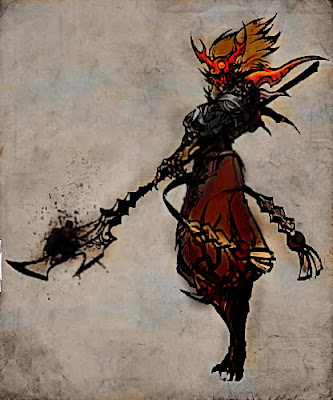 Labels: dinosaurs, DnD, into the odd, monsters, Use This