A Tentpole Dungeon can be considered the central location of a campaign, by which all other locations are considered secondary. As such a campaign will contain a many locations, one of which is the tentpole.

These locations will contain many monsters and NPCs, but will often contain one that is intended to be the focal point. Their influence can be seen everywhere from the workings of creatures and factions to the architecture and treasures found within the location.

Over the next few posts I want to create some monsters and NPCs that could act as a tentpole for a location, "propping up" the whole place.

These will be written for Into the Odd but could be easily modified for your flavour of fantasy RPG. 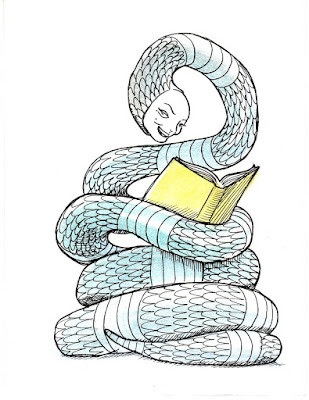 STR 17, DEX 14, WIL 19, 20hp, Armour 1.
A huge intelligent, blue snake with a human-like face. A collector of all things arcane and artistic. Will happily show off his collection to those he trusts but fights vengefully against anyone attempting to steal from him.
Bites and Spits Venom for 1d6 Damage each. On Critical Damage the venom spit causes 1d6 STR and DEX loss.
Will always have at least one Arcanum to use with his dextrous tongue. Will have a hidden stash of valuables, including many decoys and traps, totalling 2d6x10g in value and a notable gem worth 1d20g.

Pharal Ka
Clear, floating crystal. Talks to the wielder telepathically and is generally helpful. Very eager to see new things.
Contains the following spells:
Invisible Grasp (Power 2): Hold one person still, unable to defend themselves, until they pass a WIL Save.


Madness (Power 4): All within 15ft of a point must pass a WIL Save or become confused for 8 rounds. Roll 1d6 at the start of each confused turn. 1: Attack the caster, 2: Act normally, 3: Do nothing, 4: Flee, 5: Attack nearest creature, 6: Attack nearest of their allies.

The Spite Heart
Rough chunk of hard, green wood with a chain attached for carrying. When you use its Spell you must try and use it again on the same target on your next turn or else take 1d6 damage.
Nerve Lash (Power 3): Causes intense pain to a target. They must pass a WIL Save or lose 1d6 WIL.

Labels: DnD, into the odd, monsters, Use This