THE XENOFRINGE is the loose border that divides the established systems of CORE SPACE from the unknown contents of DARKSPACE. Life on the Fringe is a hazardous affair, where the frontiers of civilization meet vast, mysterious space.

As I mentioned in my last post I've been working on a generic sci-fi RPG loosely based on the core of The Adventurer's Tale. Although it's still in a very work-in-progress state I'm happy to put it out there as a preview.

There are a few parts of the game I'm very happy with and it's a slightly more crunchy affair than I'm used to. Although it's rough around the edges the core is playable, so let me know if you give it a try.
Posted by Chris McDowall at 00:53 No comments:

In stark contrast to my work on a Stone Age game earlier this week I've spent the last few days taking another shot at an idea I've never quite been able to make work. A Rules-Lite Science Fiction RPG.

Until now, that is.

I feel like I've made some real progress with a game I haven't got a name for yet. For now it has the project name Futureworlds, and I hope to post more about it when it's further refined.

So here's an imagedump of sci-fi settings that have been on my mind while writing the game. 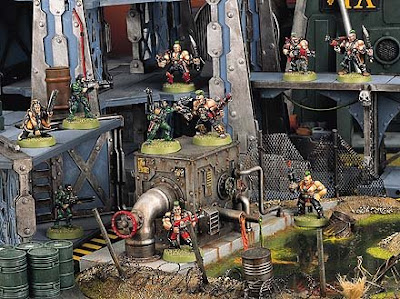 The contrast of serious and more comedic strands of sci-fi in there is quite deliberate and something I'll go into more detail on at another point.
Posted by Chris McDowall at 11:33 No comments:

Last night I made a light-hearted comment to someone that my next game project should involve dinosaurs. That got me thinking. I knew I was doomed to take this joke-project seriously. We've all seen the anachronistic images of primitive humans fighting dinosaurs, but could this idea have meat for an actual game? I'm familiar with Og and GURPS Ice-Age but neither is quite what I'm seeing in my head. Before I get too caught up in mechanics I want to nail down my overal concept.

The Stone-Age, particularly the Paleolithic, ends over 10,000 years before the medieval era that inspires more fantasy settings begins. This has impact on everything from technology and society through to even more core concepts such as language and religion. To avoid things being too mind-shattering I'm using a wonderful term wikipedia taught me today as a benchmark. Behavioral Modernity. The short of this is that my societies will follow the nine tweaked guidelines below when considering how primitive they are.

- Some permanent buildings, some temporary.
- Purpose-made stone and bone tools.
- Fishing, group hunting and fruit gathering.
- Long-distance exchange or barter among groups.
- Use of pigment and jewellery for decoration and self-ornamentation.
- Figurative art.
- Game playing and music.
- Burial of dead and basic ritual.
- Some animal domestication.

However, notably I want to keep the tech level below:
- Bows and arrows.
- Pottery.
- Agriculture and Animal Husbandry.

I'm imagining the key points of a typical story will feel quite different to fantasy, too. I'm imagining:

- No magic or real focus on earning treasure.
- Significantly tighter focus on a small group and small societies. No wars or huge cities.
- Character advancement through new knowledge and tools rather than strength and skill.
- More focus on survival and acquiring materials and tools.
- Large cultural differences and a sizeable language barrier.

There's been recent talk on the RPGBN concerning historical settings and while I'm not trying to simulate paleolithic life exactly I'm imagining this project as much more of an alternate history than fantasy. The original idea was primitive man fighting dinosaurs, but I think I can do one better than that. I love creating new animals and plants so why not set down my primitive people in a fictional region and fill it with my own creations?

The new creatures and plants will have a grounding in reality, the brilliant Morae River blog being a perfect example of what I'm picturing. A valley would be a good focal point for a region containing a range of societies and creatures but instead I'm thinking a lake. Something about all sorts of life teeming around the coasts of a lake feels right to me. Journeying away from its supply of fish and clean water may be a dangerous undertaking, and perfect subject matter for an RPG. I love the idea of the group of neanderthal-like men climbing over a ridge to come face to face with a creature they've never encountered before.

And so a good starting name for this project has come to me. Stone Lake. Stay tuned for further info.
Posted by Chris McDowall at 21:22 1 comment:

The Student followed his Master across the green plain, fresh from a filling breakfast of over-night roasted pork. They approached a shallow pond where ducks swam. The Master's spear lightly tapped the cool water.
"The Initiate must be like the pike. Lean. Focused. Hungry for knowledge".
With a splash, the master's spear sent a pair of resting ducks into motion, fleeing into the air before landing and waddling into a calmer pond.
"The Student must be like the duck. Able to leave the comfort of the water to walk or fly, never staying in one pond for too long."
"And what about you, Master?" asked the Student.
"The Master? The Master will become like the pig. Content, humble and..."
The Master paused before lightly tapping his stomach.
"Understanding his role to provide for others." he finished, with a smile.

- Fluff brainstorming for an upcoming game of A Wanderer's Romance
Posted by Chris McDowall at 17:28 No comments: