With treasure, I'm pretty generous when it comes to giving both new and ongoing characters Oddities to play with, but I'm terrible at giving actual Treasure. 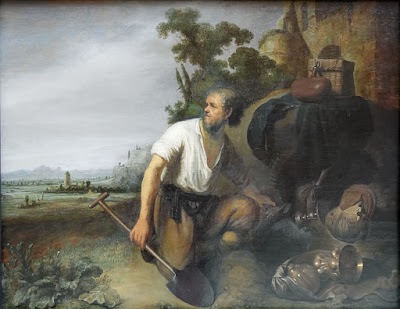 You know, something that has more value than use. The stuff that you're generally going to liquidate to fund your spending back in Bastion. Riches, Loot, Spoils. With Bureaucrats to bribe, Detachments to hire, and Enterprises to run, there's plenty to spend that money on.

I've often fallen into the trap that Treasure is boring, despite there being so much good stuff written to the contrary. If you make the Treasure too interesting then it becomes an oddity the players don't want to sell, and you end up with Oddity-rich, cash-poor characters. They have three different ways to time travel but can't afford a good meal.

Not innately a bad thing, but I want to tilt things back the other way. Here are some treasures to put in your expedition sites. I'll be working on the following principles:

The Key Principles of Odd Treasures
- Their value exceeds their usefulness.
- There's a reason they haven't been taken already.
- They needn't be complicated, but should provoke thought.

Big Stuff
The easiest way to (mostly) hit all three principles is to make it a big heavy useless thing that's worth money. I also like how it unifies the group, who have to work together to get this thing back to Bastion and split the profits.

Hordes found at the very depths of the dungeon sort of fit into this, but they're still kind of dull to me in their overwhelming volume. With so much stuff in one room it's hard to make any of it have any impact. I guess I'd just always rather use one giant coin than a million small, which brings us onto... 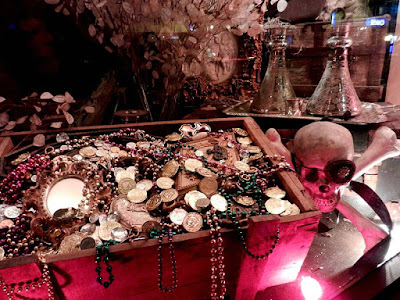 Coins and Jewellery
I'm guessing this is the most common form of D&D Treasure, but it doesn't work so well with Into the Odd. There are just more gold-loving monsters (usually humanoid) in the D&D world, so it makes sense to be able to kill the green guy and find a chest of gold. I've heard people lauding the effect of using exotic currencies in your game, but that does nothing for me.

Gems are barely more interesting, notable only really in their physical appeal, and need of a single wealthy buyer.

So there are times when I'll put a case of 20g or a ruby ring into an expedition site, most often on corpses found in really nasty places. I just find treasure items to be more fun. 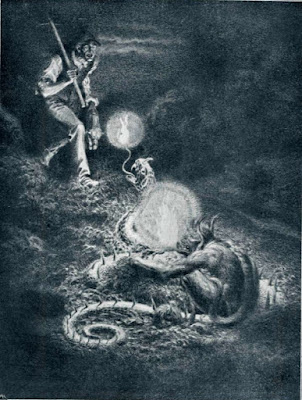 d12 Interesting Treasures
Value is always given for the right buyer, usually not general sale.

1: Black Spine (30g)
Charred spinal column of a ceaselessly destructive giant monster, blasted with every weapon known to Bastion. Visibly regenerating by the hour if removed from its acid bath.

2: Crystallization Catalyst (10g per bottle)
No use on its own, but it's the missing link for chemists to recreate a terrible gas weapon not used for decades.

3: Collectible Sweets (50s each, double if in a set with all six flavours)
Antique boiled sweets now prized for their rarity and aged flavour. The flavours are fruit, herb, spice, meat, bone, and blood.

4: Dead-Spice Liqueur (20g for the 40oz bottle, or 1g for a 1oz measure)
An infusion of extinct botanicals that smell like a more intense mint. Comes in a needlessly fragile bottle. Value is slashed in half without the bottle.

5: Companion Lizard (10g)
A sapient chameleon that changes its personality to be the perfect companion for the owner. Highly sought after as pets for rich children.

6: Deep Silk (20g for the full roll)
Ultra black silk that can very easily catch fire, stain, rip, or any other complication you like.

7: Heaven Shrimp (1g each)
Harmless little glowing shrimp that are a delicacy, but only if cooked freshly. Worth nothing dead.

8: Disgusting Art (50g)
A lead sculpture of many creatures in violent union. One in twenty collectors find the piece strikingly provocative. The other nineteen are offended if you even bring it near them.

10: Man-Egg (2g)
Appears as a stone egg to you, but apparently they're used in some sort of cloning process, where the clone is an improved version of the original. Whoever you sell it to will offer you a discount cloning (just 5g, down from 10g) instead of payment.

11: Cosmic Steel (5g per sheet)
Unbreakable panels of light metal around the size of a surfboard. Painfully cold to the touch.