Sometimes you need to put something together for a game tonight and none of the modules on your shelf feel like the right fit. Throwing together a Route Map is relatively fast, but you're also going to want some random tables, most obviously some Encounters.

I've gone from using d20 to d6 and everything in between. My list of needs for a random encounter table is:

I like d20s for things like Spark Tables where you want to generate a number of unique results, but for Encounter tables I'm moving closer to the following model.

Roll d6
1-3: Common. Three variations on a single encounter either carrying out different actions or varying slightly in composition.
4-5: Uncommon. Two variations of a more unusual encounter, again varying in behaviour or composition.
6: Rare. Something weird and likely dangerous.

Now you can really dig down into making six great entries, rather than spending your whole prep time filling up a d20 table with just-okay entries.

Let's do some examples.

The Yelling Mountain: A little piece of Hell in coldest Deep Country. 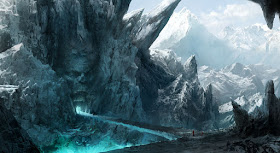