The Underground runs below the rest of the world both literally and metaphysically. 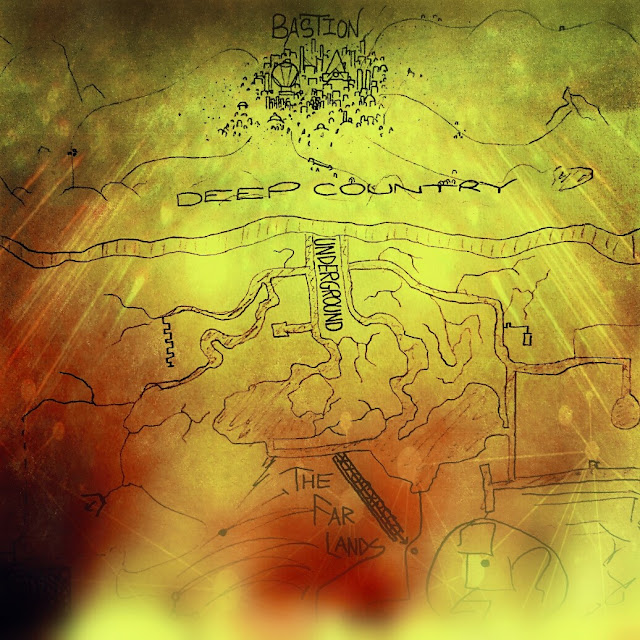 The Underground exists to bypass things. A tramway tunnel under Bastion simply wants to bypass a built-up area on the surface. Other passages bypass the usual restrictions of time and space. Underologists claim that this vast network of movement of everything is responsible for weather patterns, the rise and fall of political dissent, even the creation of the entire surface world.

We all agree that the Underground connects everything.

Equally the most exciting and terrifying connection is to the barely understood Far Lands. But a new theory suggests a different destination awaits those that continue to travel the Underground, but refuse to leave it. Those that pass by all doors and portals in favour of pushing only deeper downwards into the infinitely expanding depths of the Deep Underground.

Without any destination, and with their home stretching ever further away, the Underground makes a destination out of the journey. There are no more doors to distance places, only more darkness and passages downward. Underologists call this the Long Delve, and once you begin you cannot climb back.

There are no monsters, no mechanical traps, no twisted mazes. You only encounter what you have brought with you. Beings you encounter are replicas of yourself and significant people in your life. Chambers resemble significant places. Anything taken from here turns to formless stone.

In the case of groups, the first to pass through the door is considered the pilgrim, and others their companions.

One theory is that the Long Delve passes through nine layers. Pilgrims cannot venture back upwards, and can only descent further if they achieve a certain goal on the current layer. Failure takes a severe psychological toll, and those that lose their mind on the Long Delve find themselves wandering featureless passageways for eternity, eventually losing their identity entirely.

Unless you find them.

d6 Long Delve Eternal Pilgrims
If you don't have a suitable NPC for them to resemble, use one of the PCs.

1: The Sad - STR 10, DEX 8, WIL 3, 2hp, Streaming Tears, Naked, Resembles Somebody you have caused harm to.
- Sob and seek comfort.
- Beg you not to leave them alone.
- Indulge in pitiful gluttony.

2: The Echo - STR 13, DEX 15, WIL 2, 8hp. Faintly Immaterial (Armour 1), Your Clothes. Resembles an innocent person you know.
- Follow you and mimic your actions.
- Phase through anything that obstructs their mimicking.
- Beg for rest.

5: The Betrayer - STR 5, DEX 11, WIL 2, 3hp. Hoof Hands, Tongue Cut Out. Resembles somebody you disappointed.
- Act feebly to get close to you.
- Happen to have the exact skill or knowledge that you need.
- As soon as they meet another person, begin plotting their elaborate betrayal.

6: The Broken STR 8, DEX 9, WIL 1, 3hp. Noose around neck, broom (d6). Resembles somebody you know that died needlessly.
- Beg you to find somewhere to hang them from.
- Try to clean up after you.
- Apologise for everything, especially if not their fault.

Labels: DnD, into the odd, underground