So, on Friday Into the Odd turns one year old.

I was going to write a post about the traditional anniversary gift for one year. Then I looked it up and saw it was paper. The reprint is on its way, so job done right?

LET'S BRING THE FUN OF PAPER TO THE GAME! 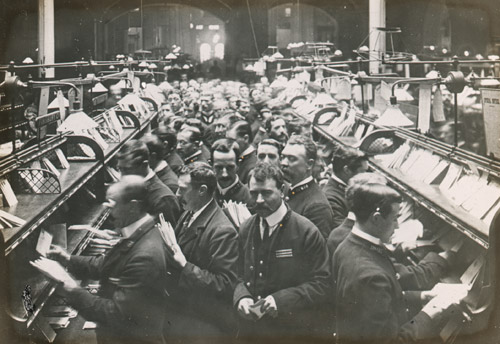 Just as the wizards of myth have spell-books and scrolls, there really is great power in putting words on paper. Bastion elevates this to an industrial scale. The bureaucratic art of Paperwork.

Of course there are some compatibility issues when everyone has their own systems in place.

1: Delegationists
With so many people processing paperwork in Bastion, it's improbable that anything is actually your responsibility. This means it's downright egotistical to actually process any paperwork yourself. Extremists apply this to everything in their life, and expect to utterly cared to by other people. They don't last long.

2: Scratchers
Take the phrase hand-written literally. Using their long nails, they can etch a barely readable script into slabs of soft wood. Extremists may try to destroy any other means of writing or printing.

3: Faunal Apologists
Sometimes terrible things must be printed. Massacre warrants, heretical theories, or forgotten torture methods. To pass the blame, beasts are painstakingly trained to type, one letter at a time, from the directions of alternate dictators. When the deed is done, the beast is slaughtered.

4: Press-Puritans
The printing press has brought mass communication to the world, so should be treated as a god. Any machine found in less than worshipful condition must be rescued, and taken to a more careful owner. Extremists would deal out harsh punishments to the heathens that let dust gather on such holy devices.

5: Dictorators
Paperwork is inhuman, so oral tradition must be brought up to date with these industrial times. Vast rooms of chanters, repeating passages from memory over and over. What an honour to be a part of the passing-on of Bastion's knowledge.

6: Fifth-Copyists
Some cosmic prophecy predicts that the fifth copy of anything will be its true form. Everything must be copied out five times, and the four lesser copied stored away somewhere safe. Copies beyond the fifth must be hunted down and destroyed.

7: The Raised Form
As we progress, a move into the third dimension of written language is only natural. Their sculpted-script is incomprehensible to all but its most dedicated devotees. The language is left open to personal interpretation, so even if you're fluent you might read it differently to someone else. Imagine communicating only through tiny clay figures and you're nearly there.

8: Bureaumantics
Who says paperwork has to be boring? Why can't it have pictures or a musical score that it should be read to? Scratch and sniff? Words come from our hearts after all, so they want to pump some emotion back into even the dullest pages. They especially love making up their own words and performing live readings.

9: Hds
Space is limited, so if we don't need to write it down then we should just commit it to memory. Short words better than long. Vwls mstly uncssry.

10: Debunkers
They don't have any good ideas, just lots of reasons why everyone else's ideas are wrong.

11: New Universal Standardists
Dedicated to finding a system that works for everyone. Fiercely opposed by the One-Page Movement that are trying to do the same thing.

12: Bottlers
All paperwork should be bottled up and thrown into the sea. If the impartial currents deem it to be important, it will wash it back up. A lot of members are just doing this for a laugh and don't truly believe it will work. Extremists break into archives at night and force their ideal on frustrated bureaucrats.
Posted by Chris McDowall at 11:01 No comments:

In the bright madness of the Hundredth Millenium, there is only Chaos.

Things that have stayed the same for the last 59 Thousand Years:
- There are humans, copyright-free Angel Legions, Orcs, and all those guys you love.
- People fight with both massive sci-fi guns and medieval weapons with chainsaw-bits.
- The Four Gods don't get along.

Things that have changed:
- The Four Gods of Chaos won, and now everything is all warped.
- The Emperor you knew is gone, but others follow.
- Every being now serves a God in their own way, from gobbos to elders, bugs to inquisitors. 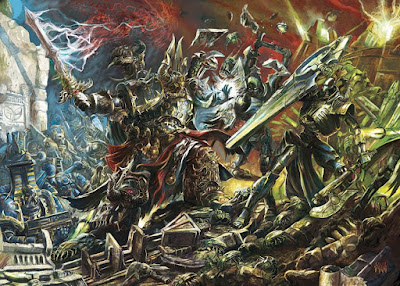 Saving Throws
Roll equal or under the appropriate Ability Score to pass.

Damage
Damage comes off your HP score. If there is excess damage, it comes off the target's WAR Score and they must pass a WAR Save to avoid Critical Damage, which knocks them out of action, killing them if left untended for an hour.

Ability Score Loss
When WAR reaches 0 you die. When DAR is 0 you're paralysed. At GRM are 0 you lose control of your physical form and either twist into a spawn or explode into a demon. 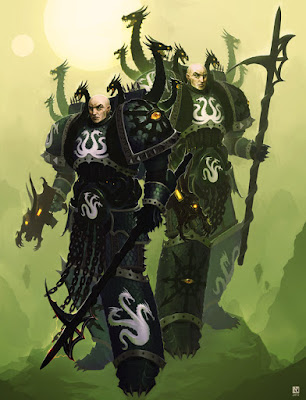 The Group
Despite your different races and Gods you have pulled together because everyone else is a total dick. Those with most in common with you are probably worst of all. It's a free-for-all, so there's ripe opportunity to grab power.

You get a Void-Boat (5hp, Heavy) between you, propelled through space by a bound Demon.

Everyone serves a God. Some claim to be free, or worship Chaos in its pure form, but they're wrong. Followers of the same God get along even worse than followers of different Gods, as nobody agrees on the details of being a good servant. 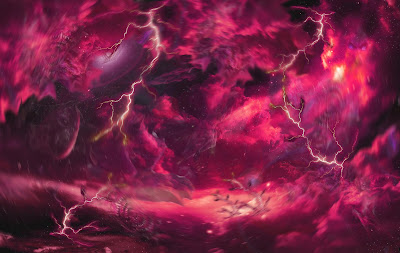 Roll 3d6 for each of:
WAR - Fighting
DARK - Doing things in the Dark.
GRIM - Frowning, being closed minded and barking orders.
and d6 for Hitpoints. 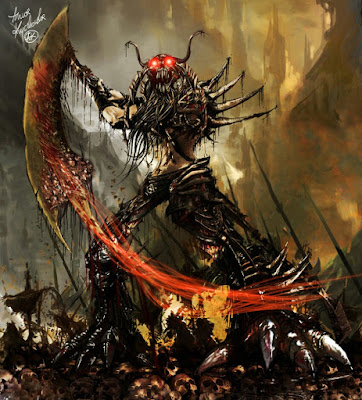 Cross reference your HP against your Highest Ability Score on the table below for your starter package. If no God is listed, choose one to worship.

Starter packages are for humans, but the warping has made everyone a bit different. Angels are pretty much humans beneath their suits and mutations. 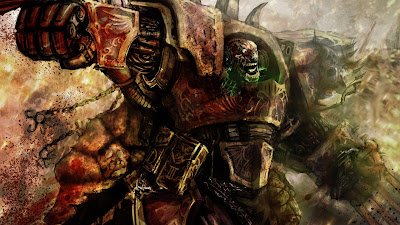 If your God isn't already decided for you, pick one. 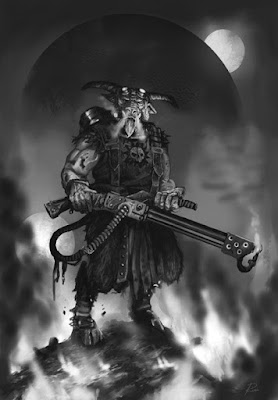 Orc Ecksozist (Tzeen)
WAR 12, DAR 7, GRM 13. 13hp. Banishmunt Prod (d6, Non-Tzeen Demons must GRM Save or be Banished).
- Summon a Demon of Tzeen, which is will refer to as an 'Oly Servunt.
- Gather increasingly fancy ornaments for his headdress.
- Report directly to a Holy Inquisitor Lord, who may provide orbital support.
Posted by Chris McDowall at 11:40 No comments: